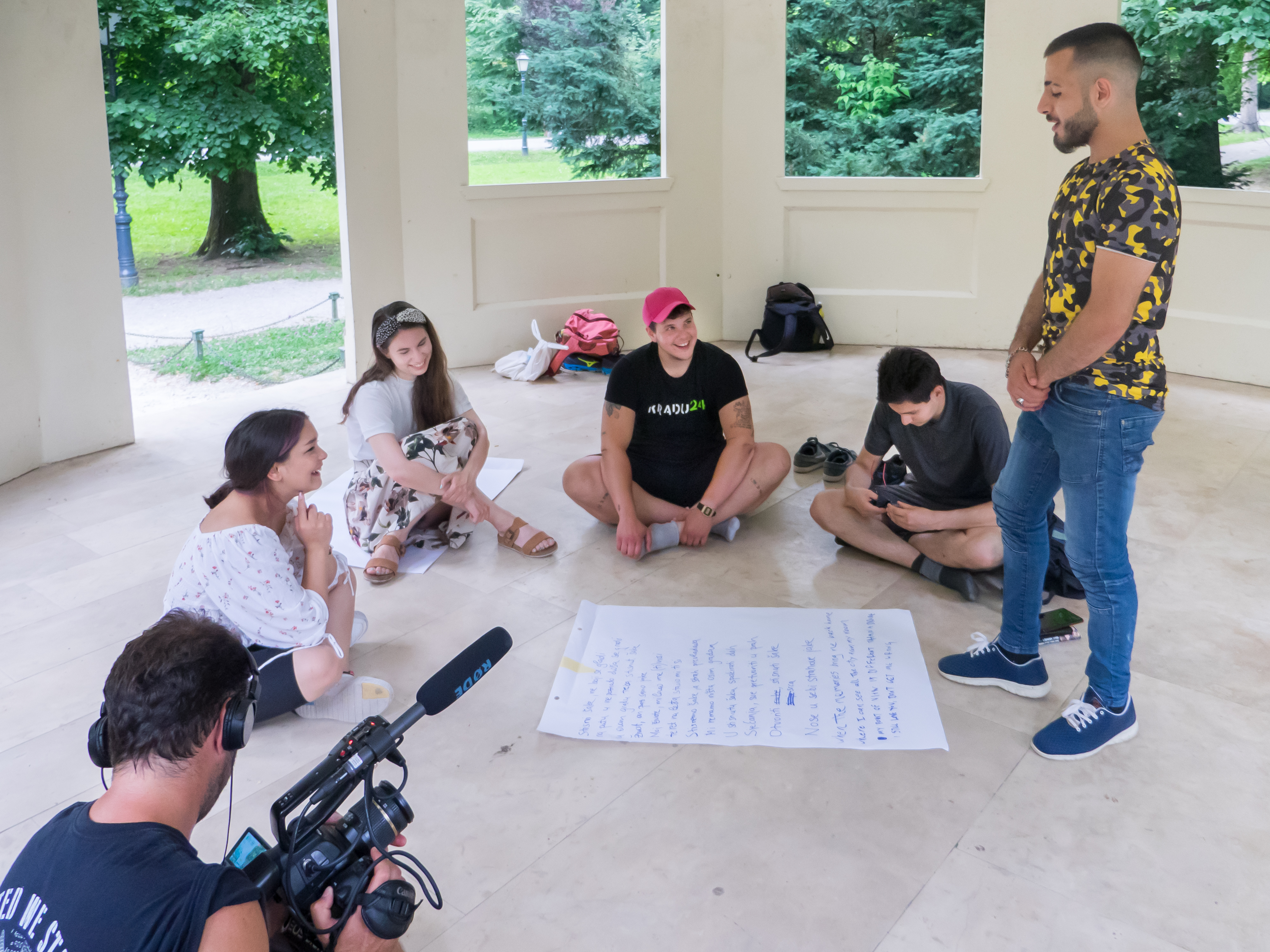 30yrs1d started as an exploration of the processes for the production of citizenship in the last 30 years and the methods, successes and failures on how we collectively decide who acquires it and how we can support someone to claim it.

Taking into account the struggles for organising the state of individual and collective autonomy, in the context of local and global events of 1991 and until this very day, we decided to form a group of people mostly born after 1991, but without prejudice to other age groups. Our group dealt with issues of belonging and language enriched by the shifts and claims that derive from encountering different moments of “movement” with a focus on experiences relating to migration and/or gender and sexuality.

Using improvisation and simple recognition formulas such as favourite songs, the group came up with a common matter and language through which talked about identities, mutual similarities and differences, feelings of belonging and claiming society and the city. Working on verses via process of combination, synthesis and elimination, we reached a collective creation of texts in forms of poems, interviews and testimonies and finally verses of a song.
This corpus thus contained both an individual expression – the verses and texts the group produced, but also what the group could recognise as their own reality and imagination – by choosing the parts that seemed important to manifest a common desire. The group also invited writer and artist Tomislav Medak for a workshop on the theme of rhythm and community through an exploration of ideas, propositions and actions as aural and textual tools for protests that included soundscapes, noise and songs. Another invitation was accepted by designer Sven Sorić to help transform texts into designs and physical objects and longings into colours by sharing a silkscreen printing workshop with the group. From that matrix of themes, motives, concepts and feelings, the process led to the verses for a radio jingle that occupies the public domain and a printed campaign that accompanies it, set as formal goals of this stage of the process while that attempts to grow as a temporary autonomous collectivity shaping autonomous individuals and vice versa.

In these first days of July 2021, the group invites the city of Zagreb and online audiences to a visual presentation of the current state, presented through performative actions and their traces in the city, culminating as a performance at Booksa on 1st of July and an installation at GMK which will be presented in the space no 7 and no 8 from the 2nd until the 10th of July with opening on the 2nd at 20h.

Erin, a typically atypical boy who is just beginning to find himself. Ambitious, but has way too many different interests and desires, so he is not able to decide what to focus on. He has an unusual sense of humour, meaning he’s not funny, but he laughs at other people’s jokes because he doesn’t want to look stupid. He runs only when there are donuts and beer at the finish line. He thinks too much, especially around 3 in the morning when he remembers how many people he misdirected when they asked in which direction to go. Life motto: seek discomfort

Espi, intoxicated by parties and the city at night. He likes to hang out on park benches and on the street more than anything and hates everything that is rich, expensive and arrogant. He loves the sea more than life itself and always competes after Sveti Rok tunnel to be the one who spots it first from the car. His favourite food is shrimps ˝na buzaru˝ – this is the only expensive thing he doesn’t hate. He looks at people’s collar bones, they are crucial for him. Today he is a criminal, tomorrow a writer, it all depends on what kind of night it will be.

Jafar collects pieces of the past trying to build a future. Lover of life and friends but used to be alone. Dreamer who finds himself in music, rapper who writes what hurts him and what makes him stronger. Papers were by his side when everyone abandoned him so he became a sound engineer, photographer, producer and musician just to make his own music. Loves to help everyone, because he knows exactly what it means to need help.

Lucija, given a degree in dramaturgy, uses it as an excuse for all the artistic disciplines she likes to practice. She writes, enjoys irony and thinks she’s funny. Along the way, she explores how people can play their whole lives. Favourite colour: baby blue.

In his spare time, mostly all the time, Manuel dedicates himself to himself and his friends, to socially engaged work, to listening to sevdah, enjoying the great outdoors, and listening to sevdah some more. After midnight, he watches sitcoms and eats yellow cheese.

Miran, a child who refuses to grow up despite his age. A big fan of board games, cycling and animals. A hamster in the human body. Sometimes a photographer. Favourite food: beer!

Severina, the singer of course, but also an actress. Acts as herself and she is good at it. In her free time, she watches Blood is not water on TV while eating chocolate porridge, btw this is her favourite food. Thinks of enrolling in the Academy of Dramatic arts, let’s see if it happens. Slowly starting to gain weight and is happy to have cellulite to shed. Often quarrels with her boyfriend for unknown reasons, this is her hobby.

Theo is an artist and director based in Athens, Greece. He is looking forward to opening up to a new and non-normalised era after the lockdown period and excited to make this start at Zagreb in June. This will be his third time in the city. His favourite colors are hues of purple.

30yrs1d is part of a research program on performativity, participation and citizenship by Theo Prodromidis supported by the Hellenic Ministry of Culture and Sports.

This project is organized as a part of collaborative project Communities of Learning, Bridging the Gap of Isolation which was initiated by WHW and supported  by Culture of Solidarity  fund of European Cultural Foundation.

Financial support: City office for culture City of Zagreb, Ministry of culture and media of Republic of Croatia, European Cultural Foundation and Hellenic Ministry of Culture and Sports.

The work of GMK is supported by Kultura Nova foundation, FFAI and INA d.d.