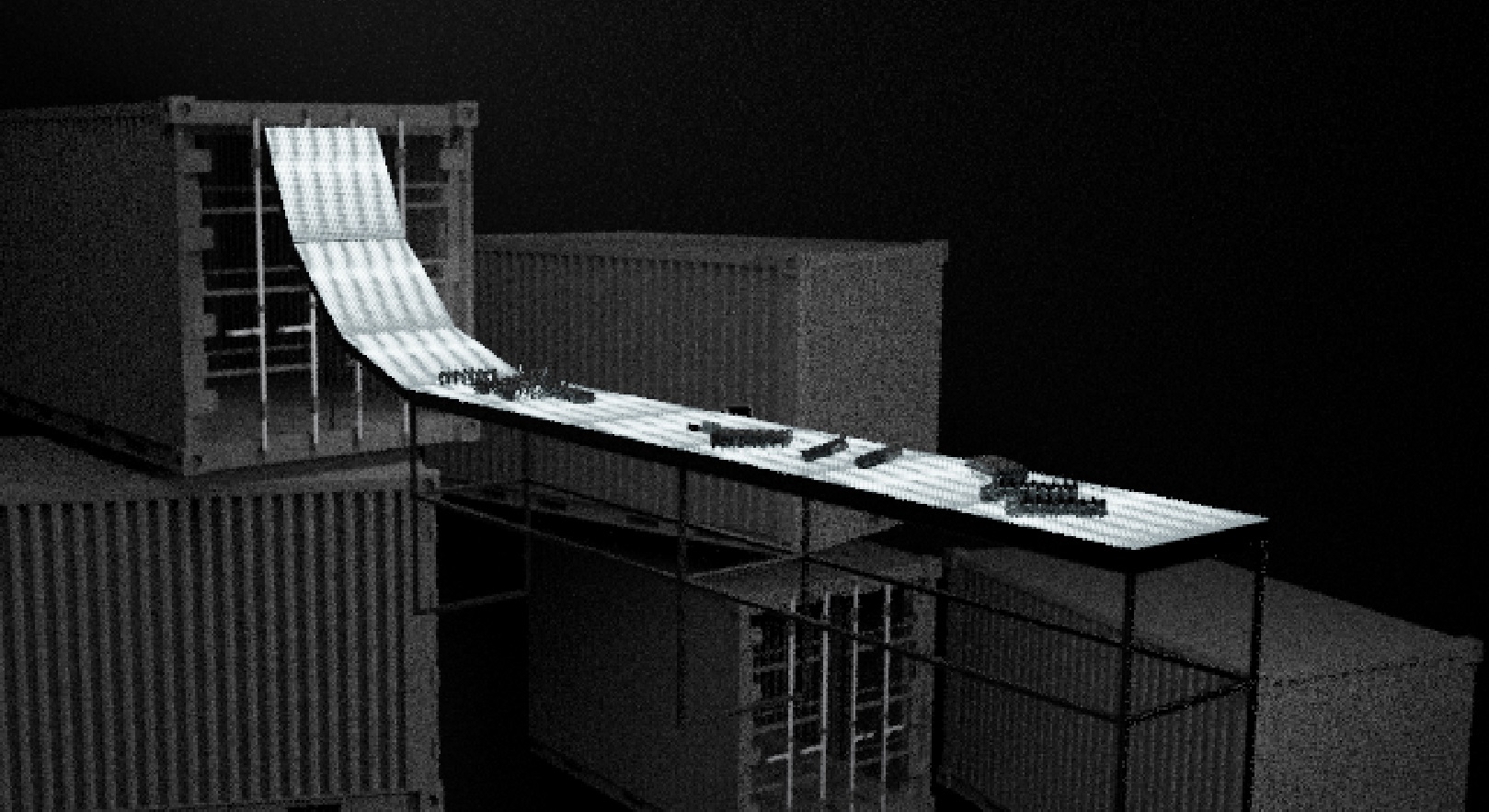 The GMK 2022 program ends with the presentation of the exhibition of Branimir Štivić, whose work was selected at the Open call for the production and exhibition of new work – Tvornica 2022.

CONVEYOR [192x1536px] is the beginning of a research dealing with the physicality of pixels. It is a project about exploitation of low paid labour, forced labour, modern slavery and global ecology for the purpose of artistic activity and production of new work. The main objective is to put the things we take for granted into a gallery space for the purpose of reconsideration and reflection on the positive and negative effects modern technology has on nature and humans through waste from work production, carbon footprint of procurement, electricity consumption and, finally, hard physical work under questionable ethical conditions when mining raw materials and electronic components. Part of the work that is otherwise invisible is transferred to the author in the form of the final production of video reproducing device set up in the form of a conveyor belt built on a „do-it-yourself“ principle and micro-procurement chain from China.

The paradoxality of the invisibility of work is equally present in museums and galleries and in all other factories such as sausage factories.* The work was created in Croatia, although the electronic components, raw materials and semi-finished products come from Chinese resellers of questionable origins and work ethics. The physicality of a single pixel makes it easy to imagine the amount of work involved in producing such technology and delivering it to end consumers. I deliberately chose a pixel spacing of 3mm (P3), which is large enough to see individual pixels with the naked eye, yet dense enough to recognize the complete picture. The obscurity of the complete picture is also present in the current era of platform capitalism, where seemingly independent and large AI platforms and automated services are launched through microwork and outsourcing of marginalized work groups and refugees.* These poorly paid workers are not able to put together the complete picture of what kind of project they are participating in and what their work is used for. This was also the case for this project, where the delivery workers diligently transported parts of the work and made microchips without knowing what they were transporting and what the function of the finished product would be. Such concealment of the final use of finished technology and ores is visible through the East-West trade war and the current economic conflicts where certain parties are trying to limit the flow of ores and electronic components and reduce the conditions for the production of key processors and FPGA chips such as those used in this piece of work. This work consists of 294,912 pixels, and I approach each individual pixel as an equally important element for which an actual-physical-human-worker is responsible.

Process
Almost all of the raw materials and semi-finished goods were ordered from a Chinese web store for resale goods in small packages during a period of 5 months. Only aluminum profiles for the load-bearing structure were purchased from European resellers from Germany, wood for suitcases are from Croatia and PLA filaments from Austria. The original plan was to also order aluminum profiles from China, but the test shipment never reached the destination. It is also the only permanently lost shipment in the entire project.

All the waste generated in the creation of this work was exposed and was incorporated into the work again. Such an ironic zero-waste policy of open access shows how the technology we use actually generates hidden garbage and a carbon footprint.

BIO
Branimir Štivić, b.1991, graduated M.A. in New Media at Academy of Fine Arts in Zagreb. He holds a master’s degree in software engineering from the Faculty of Organisation and Informatics at Varaždin. His field of work includes sound and light installations, A/V performance, expanded and live cinema, programming art, AI and sound for contemporary dance. His projects usually explore medium of sound. Technology and programming are used in his artistic practice as a main medium for multidisciplinary research of mediality of air, breath, wind, atmosphere, pneumatics, ground, deep time, “lost footage”, neural synthesis, animism, vitality of objects and matter in the age of the technosphere and anthropocene.

Project is supported by: Zagreb City Office for Culture, Ministry of Culture and Media of the Republic of Croatia

GMK is supported by: Kultura Nova Foundation and INA d.d.