Through the glass ceiling, you can see the sky filled with clouds. Simultaneously, the ceiling is both an impassable barrier and a fragile, yet sturdy, protection from the elements. This ceiling is the metaphor for a woman which is, at first glance, in 21st-century society, completely free; however, her true freedom is unreachable due to this almost invisible obstacle. On the other hand, she proves every day that she is much stronger than the society assumes.

Social roles are filled with stereotypes – a woman is a housewife, mother, wife. She nurtures, comforts, and listens. Female roles are passive; almost inseparable from terms like home, household, and family. “Female history” is also (with few exceptions) closely connected with the narrow parts of everyday life. Female history is not written by women. As gender theory and feminism show, female history is written by men – those who are, traditionally, presumed to be in the role of leader. Female experiences are marginalized, especially in societies with deeply rooted patriarchal values. The 20th and 21st centuries have brought more rights and liberties to women; but realizing true gender and sex equality remains on the distant horizon.

“Od5Do95” is a multimedia artistic project which redefines current female history in Croatia. This project is a medium for transferring female stories and experiences. Girls and women talk about what it is like to be a female in Croatia and how their life path differs from those of their mothers, grandmothers, and great-grandmothers. In the project, each of the protagonists symbolically represents one of the years in life: from 5 until 95. Artists Andrea Kaštelan and Arijana Lekić Fridrih avoid intervening in the material. They document individual stories by asking the same questions, marking the answers through video. During the editing process, they make the videos colorless – transforming it into black and white. Without further comments, their documentary approach leaves an open space for audience interpretation.

Besides interviews, the project includes a series of different materials, such as a photo gallery of objects from the personal history of the protagonists – photographs and video of female hands as the so-called female archetype. All the material is available on the web site: www.od5do95.com and YouTube channel. The project continuously runs from 2016, and since 2019, has been exhibited. The main idea is to translate the existing virtual museum of Croatian female history into material space.

The exhibition in GMK is a voyage through female life with an accent on experience and common expectations still present in Croatia. Although each interviewed woman is perceived as an individual, there is a common theme that reveals itself while watching the entirety. That theme is conflict – a conflict between the woman and social norms, but also her inner conflict. Starting from personal situations in their own families, through examples that include wider social phenomena, women are in continuous conflicts with social expectations and forced norms, traditions, customs, and roles. At the same time, being immersed in rigid social rules since early childhood, women develop inner conflict which revolves around individual opportunities, needs, liberties, and actions. The exhibition tries to unveil female thoughts through their spoken words as well as objects which are part of their intimate lives and which represent their relation to personal perceptions of being a woman. 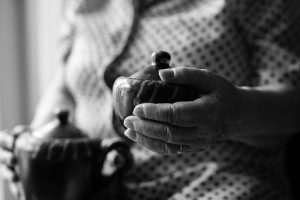