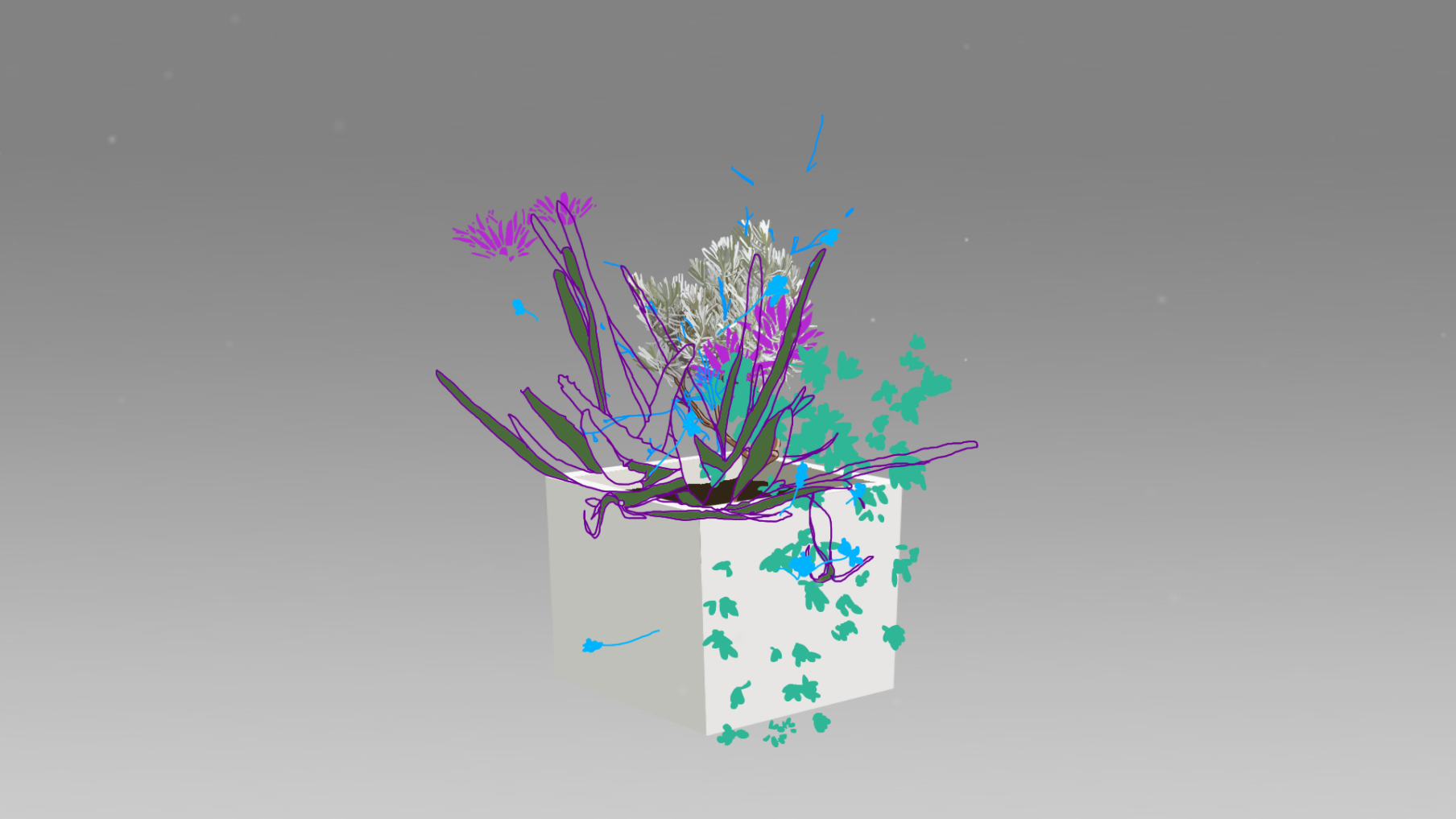 The elements we can manipulate with are in control of growth, appearance, and life of the plant. Light, color, transparency, sound, and combination of these four elements are a base to cultivate your digital plant. Each element can reach a value of a maximum of 100 points. The player is trying to find balance among all of the elements to achieve homeostasis: the optimal conditions needed to keep the plant alive. There are more than 8 billion different combinations of intertwined elements and at the same time, there are 8 billion possible visual representations of created plants.
The videogame is envisioned as a set of possible digital translations of the herbal world and how the concept of flora can be redefined in a digital surrounding. A large number of plants digital visualization is directly inspired by nature, while others in their color, texture, and placing suggest work in progress, heterogeneous structure. Through leaves, stems, and roots, different digital plants are networked in the emerging hybrid organism.
In the ’90s, Tamagotchi, the digital pet, appeared. The main concept of Darko’s game is close to this model. On a basic level, taking care of and upbringing healthy pet replicates models of real life. Lack of care results in death, but simply, by pushing the button and restarting the Tamagotchi machine, we can revive the pet. In a similar way, Bly-ka puts a player in the position of power in which player can freely construct their plant. However, due to unpredictable relationships among given elements player is enabled to have complete control over personal floral creation.
Byl-ka project is also focused on building a digital archive of all created plants. Player has an option to memorize and save a finished plant or the process of plant’s creation. In that way, this artwork includes another dimension by transforming into a plant catalog, the digital herbarium.

Darko Masnec (1985., Celje) has graduated in the University of Maribor, Faculty of Education, Department of Fine Arts in 2009. and three years later he defended his master thesis on the Academy of Fine Arts in Zagreb, Department of Animated film and New media. In 2017. he defended his Ph.D. thesis „Zagreb’s school of animated film – artistic and economic practices in the context of videogames”. He works as a docent on the Academy of Fine Arts in Zagreb. He is the author of multiple awarded animated movie called „I know what I hear”, he worked as an animator on a large number of short movies, published several articles and lectures on subjects of animation and videogames. Considering exhibition practices, he is mostly occupied with conceptual art.

Projekt is supported by the City of Zagreb.

GMK is supported by Zaklada Kultura Nova and Foundation for Arts Initiatives.