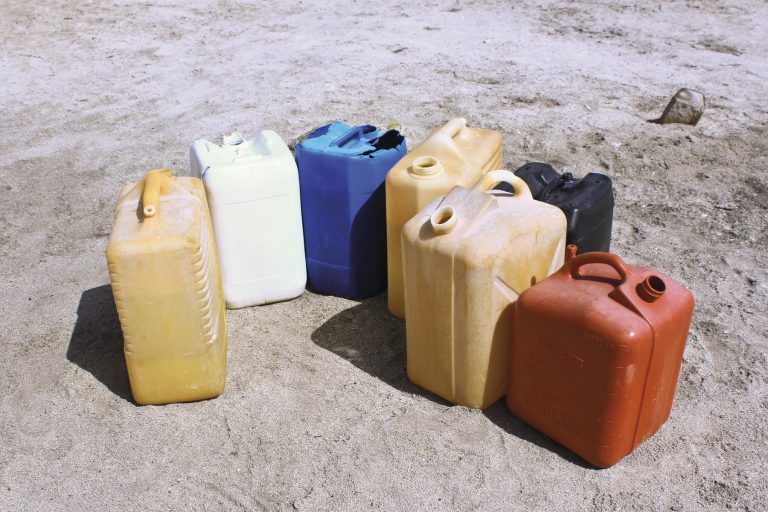 Miguel Soto has worked together with a student from the Art Academy of Zagreb Natan Sudec, to convert found rock cores into a design for a space heater. Living in Santiago de Chile, Soto first encountered these cores when his grandmother came back to Croatia after migrating to Chile during the Frist World War. On arriving, she realised she owned a property on the peninsula of Pelješac and drilled the cores to see if the property could be exploited for minerals. By shaping these cores into old designs of radiators, Soto creates a material narrative between the stone and the common objects they create which become part of the local visual vernacular.

Ana Alenso has worked consistently with the theme of oil extraction and its link to “resource curse.” The curse is the common trend that minerally rich countries often fall victim to intense political corruption, mafias, and even warlords who vie for control of productive areas. Originally from Venezuela where a national crisis continues at the expense of the population, Alenso has investigated a scandal linked with a succession of events around 2014 in which fracking was intended for the Adriatic. Tracing the line of events from oil and gas companies such as INA and MOL, to specific politicians, and the activists who stopped the structures, the installation references the precarity and constant work that goes into preservation of the common good. Using recycled and found materials from Zagreb waste plants, the sculptural installation references the craze for extraction that often irreversibly damages resources of much greater value.

In the black box room of GMK four films will be projected in loop that diversify the topic of society’s connection to material phenomena. From fire and invisible toxins to lithium and gold, the films follow material in relation to the body, the psyche, and human environments.

Callum Hill, Crowtrap, 2018, 15’, intertwines the stories of two men whose tendencies to pyromania connect them in their material relation to the world. Filmed across the UK and Germany, the film connects current geopolitical tensions with parallel lives. One character presides over a coal yard separated from the outside by fragments of the Berlin Wall. His life and relation to fire is contrasted by a heather-burner in North Yorkshire. Their common experience of historical event is narrated by the artist and unfolds through references to art history and labour.

Alina Manukyan, The Precious Metal Stays Noble, 2016, 10’12” draws attention to gold’s central role in the exchange of objects within society. This metal which has historically been coveted due to religious and cultural processes becomes a stable element to hoard and save. The metal adorns the human body both outside and becoming one with it. The film shows the metal receiving devotion, being implanted, but also melted down from objects to its pure liquid value. Speculating as to whether gold’s economic value can be destabilised, the film questions its inherent chemical makeup and pre-human existence.

Alejandra Prieto, Lithium, 2019 is filmed in the salt plains of Northern Chile and Bolivia where large percentages of the world’s lithium is mined. This mineral is used in everyday electronic and hand-held devices. The invisible material is carried in our pockets everyday. It is also ingested in the form of pills as a stabilising cure for bipolar disorder. The chemical compound connects the human psyche to electronic hardware and some of the most desolate landscapes on earth.

Matthew C. Wilson, Geological Evidences, 2017, 13’ addresses the current uncertainty about the future of humans on earth in the face of climate change. An unclear and unsettling relationship between the past, present, and future haunts a landscape that at times seems like another planet, the contemporary moment seen through non-human eyes, or a post-apocalyptic earth. Geological Evidences was filmed in Schöningen, Germany, in and around an archaeological excavation where pre-Homo sapiens hominids organized socially to hunt paleolithic horses and extract their energy dense bone marrow. The immediate area also includes the open-cast coal mine within which the archaeological excavation is located, an exhausted and backfilled coal mine, a coal-burning power plant and its waste-water pool. Shot in infrared – a radiation emitted by the earth and trapped by greenhouse gasses as well as by the body as a result of metabolism – the film images landscape shaped by the primordial and on-going drive for energy dense fuels.

The exhibition is funded by the Ministry of culture of Republic of Croatia and City of Zagreb.