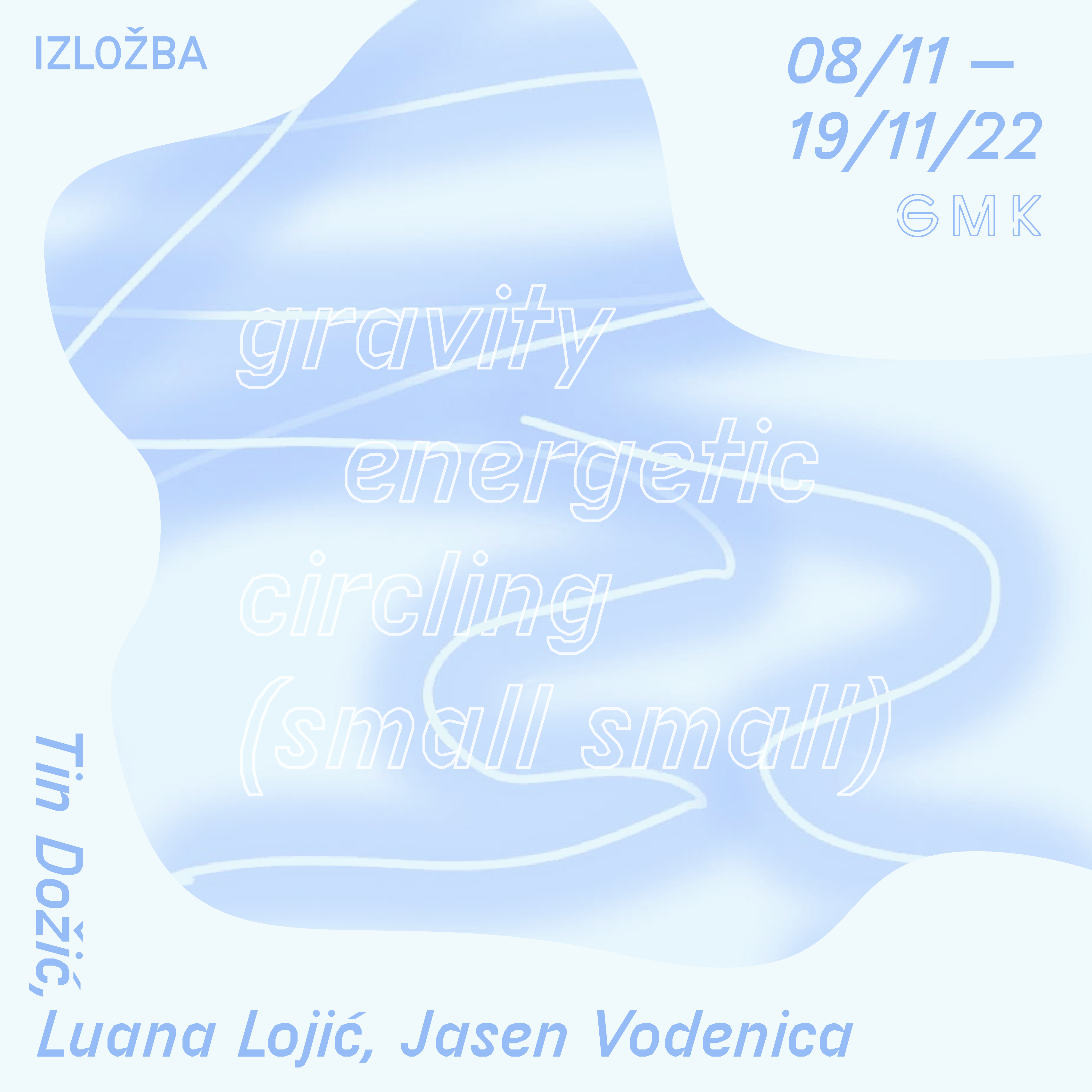 Establishing a new relationship between humans and their environment, as well as revising the relationship of humans with themselves, forms the basis of the artistic work of the Slovenian artist Marko Pogačnik. His extensive career has been dedicated to ecological action through art, which lead to the development of the theory of geomancy, an intuitive kind of science that provides tools for the ecological healing of space. “Lithopuncture of the city” is a project of his presented in Zagreb in 2004. Thirteen stone columns with carved cosmograms (abstract motifs defined by Pogačnik as communication symbols of the cosmos) marked thirteen energy points of the city as a living organism. A couple of years after the installation of the columns, the city authorities removed them.

Inspired by the project of lithopuncture, geomancy and the overall work of Marko Pogačnik, the curatorial team of GMK invited Tin Dožić, Luana Lojić and Jasen Vodenica to provide their response to the artist’s work with new productions. Guided by sensory thinking, they present works that establish new relationships of the neglected subconscious and immediate environment.

Entoptic images are a visual phenomenon that occurs inside the eye. They come in many forms – shining stars, zigzag swirling pearls and whirlpools, various reflections. Phosphenes or floaters are just some of the names we use to describe the variety of entoptic phenomena such as specks visible when looking at the sky from a lying position or appearing when pressing on tired eyes. In the book “The School of Geomancy”, Pogačnik mentions the “ability of internal observation”, or the natural ability of human communication on a sensory level, which is the result of the long-time development of communication methods with other types of energies and energy beings. Among the artistic techniques are cosmograms carved on a massive lithopuncture stone which reflect sunlight to another dimension, one where the eye takes on some other forms. Relief forms are used for the purposes of light signalling and interdimensional communication with other types of “eyes”, or perhaps, seeing sources. Luana Lojić tries to approach phosphene images as a language of space by drawing with her eyes closed, imagining light as a language of multiple dimensions. Each space she visited had a different light imprint and the opportunity to use the vitreous (a glass-like gel that fills the eye) to feel the glow of streetlights, the sun, a mobile phone, or the movements of people on the street. This work is an attempt to penetrate the feeling of disappearing images of light situations.

Multimedia installation “Transpositions” is created by intuitive reflection on the methods and procedures used in Pogačnik’s work “Lithopuncture of Zagreb” and his joint work with Marika Pogačnik “Emergency Exit”. By comparing his own work with Pogačnik’s, Tin Dožić notices that the two of them share an interest in environmental issues and the upcoming disaster, with intuition becoming a key driver of the materialisation of an idea into artistic work. In the context of Dožić’s installation, the reflections on transposition of Earth’s resources as a factor of environmental destruction, elements of dreams into reality, waste materials into gallery context and the material into digital, topics both artists are very familiar with, become the basis of the work. The dream about the exhibition that has not yet occurred is materialised through the collected waste, natural and scanned materials from Medvednica, which is, according to Pogačnik, the energy base of Zagreb.

JASEN VODENICA: What time is it?

The concept of time forms the foundation of Jasen Vodenica’s work. Visiting the areas of energy points identified and labelled by Marko Pogačnik in “Lithopuncture of the city”, Vodenica observes Zagreb public clocks located in the immediate vicinity of the sites. Inspired by the diagrammatic and conceptual essence of the works of the OHO group (of which Pogačnik was a member), he questions the understanding of time among communities. He wonders what other, alternative ways outside of our current conventions might more effectively align us with the real rhythms of the world, with the sun or other elemental beings? Determining causality as a basic guideline for understanding the contemporary social phenomena, Vodenica points to its one-dimensionality and rigidity, as well as to its close connection with techno-science paradigms. He contrasts this notion with the beliefs of traditional communities that aspired to the absolute preservation of order in the cosmos. The preservation of order is visible in language, so for example, the North American Indigenous peoples understand time as the cosmos, and the cosmos as a living being that is born, grows and dies on the last day of the year and is again reborn with a new year. The responsibility of the rebirth of the cosmos lies with each member of the community. The artist further emphasizes how order in spatial abstraction corresponds to purpose in temporal abstraction, and how every entity is an abstraction if viewed atemporally, just as every process is an abstraction if it has no spatial aspect. So, what we call structures are also slow processes of long duration. This makes the “living” Earth a spatio-temporal unit.

Project is supported by: City Office for Culture of the City of Zagreb and Ministry of Culture and Media of the Republic of Croatia

GMK is supported by: Kultura Nova Foundation and INA d.d.