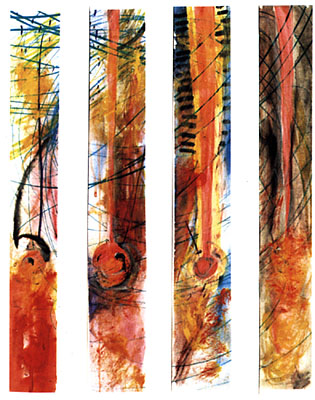 Karina Sladović with her meticulous graphic technique speaks the language of precision which is synonymous with the nature of graphic. Her prints mirror the artist’s soul combining visual experience with contemporary desire for artistic expression. This exhibition in the Miroslav Kraljević Gallery is a true promotion of artistic maturity and individuality which mark the nineties and presage the new millenium. Karina Sladović is an artist whose graphic art differs from the forms of the past decade when artists chose to follow the media and were divided between genres of stylistic kitsch, popular art, retro art, self-centered art. Now we are witnessing as many trends as there are artists so if there is any trend at all, than it is the “return of individuality”. In the era of new conservatism the artists are back on the road of loneliness and independence of any trend, which gives them exclusivity. They have turned back into themselves, accepting the frightening freedom to reveal old secrets of painting (and in Karina’s case that means etching), old techniques, old and new iconography. As a young artist Karina Sladović is full of optimism, typical for her generation which is not impressed by media and has nothing to demystify, and is oriented towards traditional artistic values. This new conservatism is not just new – it can also be recognised as NEO conservatism. Karina Sladović, with her multi-layered iconography has already joined her generation with this new positively oriented conservatism. The piece of her art which best explains the both her imagination and skill is The Garden (Vrt). This multi-layered graphic work with characteristics of monochrome painting teases by its quality and semantically by stratified meanings. Her artistic skill meets her fantasy world beyond the real one in eatching, the most complex graphic technique. Meticulously drawn details and shapes are intermingled with layered perspectives. Faced by her prints we enter into a phantasmagoric world of beetles, birds, plants which are never to be fully decoded and explained. They are successful merging of biological naturalism and poetry. The Garden (Vrt) is a paradigmatical place where Karina Sladović determines her interests thus this exhibition in the Miroslav Kraljević Gallery is also a view to the artist’s mirroring soul.

Karina Sladović was born on April 17th, 1965 in Zagreb (Croatia), where she graduated from grammar school. In 1984 she enrolled in the Art Academy, and graduated in 1989 in Dubravka Babić’s class, specilizing in graphic art. In 1991 and 1992 she goes to Paris, Cit( des Arts, seeking for further perfection in Croatian atelier on the banks of the river Seine. In 1990. She published her works in Nagy Vilag Magazine, a world-famous magazine for painting and literature. The National University Library (NSB) keeps her drawings and paintings in its collection of graphic art. With women artists Ljerka Kallay, Nives Kavurić Kurtović and Zdenka Pozlarić together she illustrated Milica Marović’s book Letters of Don Quixote to Dulcinea 1994. She decorated public area as well: murals in Ravnice in 1989, the facade of kindergarten building in Bienička St. in 1993 both in Zagreb. She participated in charity auctions in 1991: for salvation of Dubrovnik (Mimara Museum), Wall of love (Mimara Museum), Museum of Vukovar in exile (Mimara Museum) and for each of these events she gave one of her prints. She also contributed for reconstruction of Zadar (The Intercontinental Hotel) with a piece of oil on canvas The Acts, in charity exhibition held in Frankfurt with another piece of oil on canvas A Woodcock and she gave ten of her drawings from her exhibited collection The Eyes of Truth to von Tyessen the baroness. From her student’s days till now her work has been recognized and praised by many established Croatian artist and art critics: Josip škuljica, Stjepo Miović Kočan, Tonko Mroević, Sonja Seferović, Miljenko Foretić, Hrvoje Pejaković, Ljiljana Domić, Dubravka Babić, Josip Depolo, Miljenko Vojta, Inga Kratofil, Stanko špoljarić, Josip Bratulić, Saša Pavković, Ivanka Riberski, Lidija Roje Depolo. Her main technique is eatching, she was the only representative of Croatia on the World Biennial in Biella, Italy, in 1993 but she works in oil, acquarelle and ceramics (The 4th Triennial of small ceramics). Karina Sladović is a HDLU and LIKUM member and since 1990 has been exhibiting independently under the aegis of ZUH.