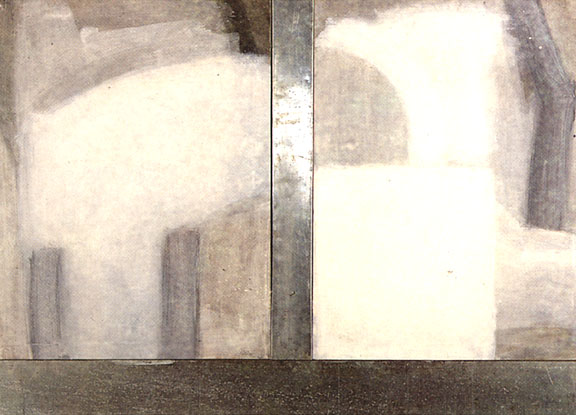 How to paint “painterly” – “post-painterly” today in Rijeka?

Melita Sorola Staničić has “appeared in public” with her paintings as one of the latest “new comers” in Rijeka’s (Croatia’s) art scene at the end of the last and at the beginning of this decade, together with some other young painters from the Art Department of Pedagogical University in Rijeka: Jasna šikanja, Boris Kačić and others.

The beginnings of her sensibility and her approach to painting coincides with new-informal and new-abstract events at the end of the eighties in Rijeka, with “the controlled gesture”, “sign, gesture and substance – for the second time”. And so Sorola is “on the road again”, from the very beginning. Many of the (“authentic”) heterogeneous influences are included gradually, step by step in her construction of the painting. Sorola together with her bond to the tradition of lyrical abstraction, the world’s and our abstract expressionism and in smaller scale to the informal art of painting, also maintains a constant tendency towards figuration and the theme of the human body. Although in discreet signs and what seems like a “mimetic” association to the body, to the figure, which is frequently reduced and is barely recognized – like a sign, gesture, shade of color or softly set apart by a reflection of the color, but nevertheless integrated into monochrome and no seldom “colored field”. There is some conception of a possibility of declination or maybe even “inclination” towards the range of the American study of “post-painterly” way of painting (Motherwell, Rothko, Newmann…). Misty blue (gray) white – gestures, painty actions are becoming calm, soft, controlled – so that they don’t disturb the integrative or even the total effect of the “fields”.

Lately Sorola shows more interest for the “hard edge” – painting, for sharp edges and shapes that is the construction, formation and multiplication on the formats. This goes deeper into the concept of a painting and into the problem of articulation and interacting co-ordination of its elements. Painting action is put to a question, brought under inspection, but sometimes it is totally eliminated. As is the figuration. Sometimes it is not present, where as on other paintings it is present. On some of the paintings from this exhibition, there can not be any talk of “spontaneity”, “freedom” and “coincidence”. It is a matter of strict geometrical construction on the formats and accurately measured relations of all elements of the paintings: mechanically evenly painted dark blue and light blue stripes in abstract – geometrical composition of sharp and straight edges. Rectangular color stripes are mutually extended, they don’t mix, they don’t cross and their straight sides are parallel or identical with the edges of the format. Sorola has in the same way included the opposite source, the extreme alternative of gestual expressionism in her own approach to the painting and towards her work. In this way she has liberated her painter’s “sensibility” from the terror of “authorship”, “subjectivity”, “individuality” which in some of her other works she retains, trains and develops. With this she has reached one of the fundamental ambivalence in her positional split of a contemporary artist. At the same time she has strongly defined and registered her artistic position in the co-ordinates of the new Rijeka’s art scene – which for her we can mark with the names Stipanov, Mogin, Pomgrac, Božić, Grdić, šikanja…

Melita Sorola Staničić was born in Rijeka, 1964.
She has graduated from the Pedagogical University in Rijeka, in the Department of Art and Culture, with elective class of painting.
She has been living in Volosko since 1982, and has been giving exhibitions since 1987.