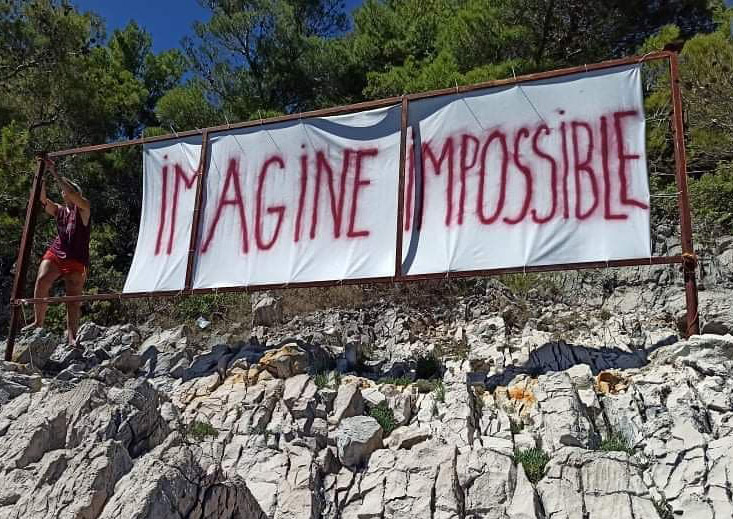 Neža Knez based her upcoming research on children’s statements about the possibility of a “machine” that will save the world. The sketch of this machine, in a form of a kinetic object, was created as part of the project ‘Deus ex machina’ in Ljubljana (2018).The mechanical movements of the object indicate its supernatural powers on which the children have decided: it can fly and reach the sky; it has a bridge through which flood or lava can be avoided; it has binoculars instead of eyes, etc. Intense conversations about the future simultaneously raise serious questions about our present. Those “naively childish” forecasts and solutions open our eyes to the core, to the structure of a society and strategies being practiced. What do equality and democracy mean, can we and should we be different, does hope exists, what does it mean to rule (to be Deus ex machina) or win?

Neža Knez:
„The title of the project in GMK is „Sketch for a film“. During the research, I will hold workshops for children, create sets and costumes, as well as text and sketches for the film. I also plan to execute micro-actions in a public space inspired by the process. My aim is to create parallel realities, which are not limited to things and their properties. The socio-political context present in childish communication encouraged me to approach this research through the lense of absurdity and humor. I want to pose some of the following questions:
Which role has collaboration in the greater transformation of society?
How to reconcile theory with action?
How to combine a rigorous understanding of the problems with more pragmatic and effective urban interventions?

Neža Knez was born in Ljubljana in 1990. In 2014 she graduated in Sculpture at Academy of Fine Arts and Design, where continues master’s program under the mentorship of professor Jože Barši. For her thesis, she received the highest recognition Summa Cum Laude (2017). She has participated in numerous solo and group exhibitions in Slovenia and abroad and has received several awards, including the award from Ministry of Culture, Mobility Grant (I – Portunus, Goethe Institut)Ljubljana City, UL ALUO Recognition and UL ALUO Award for exceptional student achievements, the award for an innovative approach to graphic arts, the Prešeren Student Award of the University of Ljubljana and the OHO Group Award. She was the recipient of a two-year residency for young artists at the Švicarija Creative Centre and participant of WHW Academy in Zagreb. She lives and work between Ljubljana and Zagreb.

At the time of the start of Open Studio, the funds of the City of Zagreb and the Ministry of Culture are still unknown.
The work of GMK is supported by INA, Kultura Nova Foundation, Erste Solidarity Fund and Foundation for Arts Initiatives.

Given the current epidemiological situation, there will be no official opening, but you will be able to visit Open Studio every Wednesday from 4 pm to 8 pm (January 27, February 2nd, February 10th and February 17th).