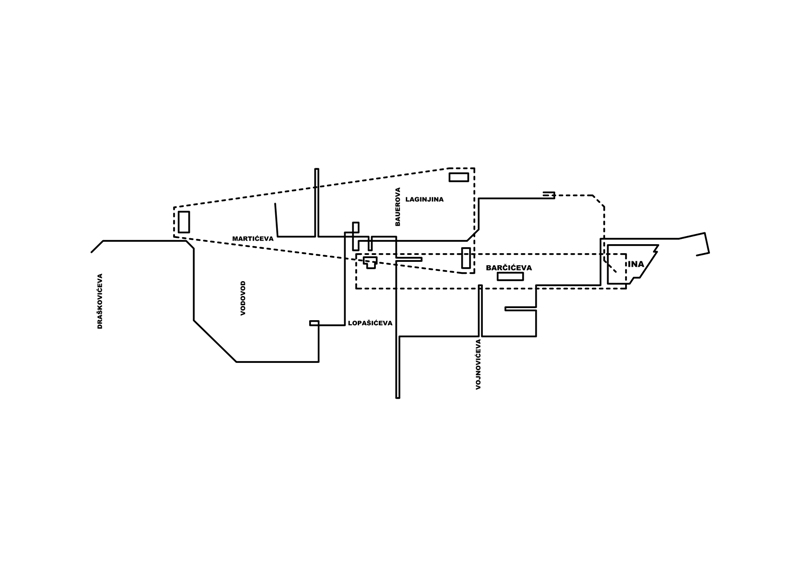 Exhibition „Neighbourhood: Docufictional Storyboard“ is continuation of workshop held as part of DDZ 2017. festival, which produced four docufictional narratives in diverse audiovisual formats. Works exhibited confront simplistic logic of „branding“, while DDZ area (part of Zagreb framed by Draškovićeva, Vlaška, Držićeva and Zvonimirova street) is presented as field of diverse and often irreconcilable paradigms, where faction and fiction blend together.

In general, processes of urbanistic revitalization of a specific part of town should have positive ramifications for public space and its inhabitants, but if those processes aren’t adequately thought out, supervised and directed, their effect can turn out to be destructive as well. Negative effects are analogously reflected on cultural production and creative sector since those agencies are often used as speculative ways to increase prices of real estate, as well as rent.

Parts of population with lower average incomes are the first ones to experience the effects of such price growth, which in turn causes social marginalization and general decrease in life quality among them.  Even though employees in local cultural and creative industries are participants in processes, at the same time they are equally affected by those changes as other residents  of certain urban area in question. Barren cultural and social landscape, as well as gradual disappearance of all non-commercial activities are some of the direct consequences of those processes.

Beside festival itself, the title “Design District Zagreb” also refers to a part of town which is very active and frequented by local people – its residents, strategic institutions as well as civil society and non-government organization employees –  even outside of the festival period.

During the preparatory phase for workshop that was held in June 2017., mental map of neighbourhood was made for which was intended to offer a layered depiction of its subject area combining multiple perspectives. This hybrid and synthetic map was used during this year’s workshop as groundwork for interdisciplinary narrative experiment in which twelve students and professionals from the fields of architecture, design, dramaturgy, cultural anthropology, new media and sociology took part.

Exhibited narratives, articulated in diverse media, share critical stance based on selective, parallel interpretations of historical layers present today in this area, as well as recent, revitalizing effects of neighbourhood’s festivalization. Although four narratives constructed for this occasion at first glance appear futuristic and their atmosphere resembles noir, at the same time they articulate guidelines for discussion. Content of discussion becomes contemplation on possible ways to confront repercussions of existing gentrification processes, both in this neighbourhood and in other areas where this processes are active.