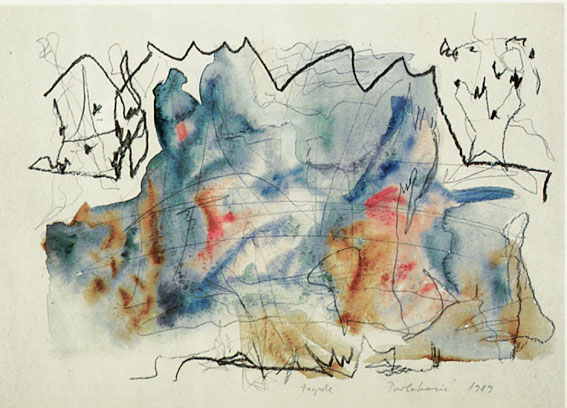 When selecting works by Vesna Pavlaković for the HDLU-exhibition 5 + 5 entitled “The Symbolic Speech of Color” and staged in Ljubljana, I did so fascinated by some kind of inconstancy of her azure patterns, both figurative and abstract. I noticed that this artist of a younger generation was literally flushing layer by layer of her own picture and thus conjugating the intuitive and the analytical to the point of separation. That is why her painting contains qualities expressionist and primary, demonstrative and subjectless. Demonstrative because in one of the layers she keeps the distant reflection echo. When I say “subjectless” I do not mean it at all in the historical sense of the word. The subjectless in this case denotes a note made of the intuitive, imaginative stream of consciousness literally snatched away from nothingness. With her latest works, principally those in the combined watercolor – pencil technique, Vesna Pavlaković insists on separation, which now manifests itself in the way she conceives her picture. These patterns, cadres, are composed of two halves literally. For example, one half may be attributed to the influence of Pollock or early Ashil Gorky, and the other to that of Hartung or even Luccio Fontana. Just to mention, that does not perforate paper.

Instead she marks possible perforation places with sudden ” cuts ” with her pencil. As a matter of fact , it is a case of a doubled rather than separated picture, which blurs the unification of the trendist and individualist statements, questions the abstract cognition in painting and, finally, points to the breaking, even fragile spots of perception. Further, her expression cannot be evaluated in terms of collective generation shelters, such as the New picture or the Croatian TransAvangarde used to be, nor does it joins the shift to the abstract expressionism of gesture typical of the mid-eighties. It may be more apposite to explain her entire work to her personal interest in the analytical i.e. the primary, in the primary in the painting media, rather than in painting itself. Her specific procedure, the picture “flushing” to a primary layer that keeps the “distant reflection echo” can be interpreted as making a theme out of the abstract.

In pursuit of it in the current year, she goes on nothing “all her first visions”, guided by a seismograph inside, challenging what in painting is wrongly referred to as irrational. It may be rightly argued that her painting (from oils to watercolors with the pencil traces) is close to what is called stream of consciousness in literature. However, it is also a painting of concentration, it is, let us say, a place where the entire experience of “artistic seeing” and “seeing the artistic” is summed up in the artist’s hand, in an instantaneous and faultlessly thought-out gesture guided by the imagination seismograph. According to Theodor W. Adorno’s “Theory of Aesthetics” (chapter “Imagination and Reflection”) Vesna Pavlaković has come quite close to what Adorno terms “differential element of freedom amidst predetermination”. I quote: “If every work of art implies a set-up of probably apoteric problems, this would not provide even the worst definition of imagination. Since, however, the essence of imagination consists in the ability to determine beginnings and solutions, the beginning and the end, alpha and omega, we can call it a differential element of freedom amidst predetermination”. Following Adorno’s argument of imagination – which manifests itself as void to be articulated by a work of art – we reach the philosopher’s conclusion: “In self-sufficiency of the unintentional artists feel what distinguishes them from the dilettantism.” Indeed, the paintings by Vesna Pavlaković, especially those of the present latest cycle of hers, are virtually made of such “self-sufficiency of the unintentional”. Hence her choice of the “fastest technique” (fastest for recording the stream of consciousness) – the watercolor. She conjugates it, in the boldest version of the unintentional, with the dotted traces of her pencil – on that other half of the picture. As I already said, such a doubled picture blurs the generation unification adjusted with the cultural industry. It does the same with self-unification, with confinement of individuals, and artists within codes of their own mannerisms. Or, it may be asked if this insistence on “self-sufficiency of the unintentional” has with Vesna Pavlaković become maniere, contemplated rather than painted. Is it possible to answer the question? In considering this exhibition, which involved a complicated task of entering another person’s stream of consciousness, I could have departed from the principle of association by insisting on a blurred equestrian in the azure of a landscape discernible as a distance echo in some paintings by Vesna Pavlaković. However, in her work of this cycle, in pursuit of “self-sufficiency of the unintentional”, the artist has made a slight but vital step further away into abstraction, like the equestrian’s shift in infinity.

Vesna Pavlaković
Born in Zagreb in 1955. She has graduated painting from the Academy of Fine Arts in Zagreb in the class of Nikola Reiser in 1982. In 1986 Vesna Pavlaković was guest student at Statens Kunstakademi in Oslo, Norway. In 1987 she lived and worked in Statens Kunstakademi’s atelier in Paris and in Cite Internationale des Arts, Paris. In 1988 she stayed in Oslo and Bodo, Norway, working on her new exhibitions.