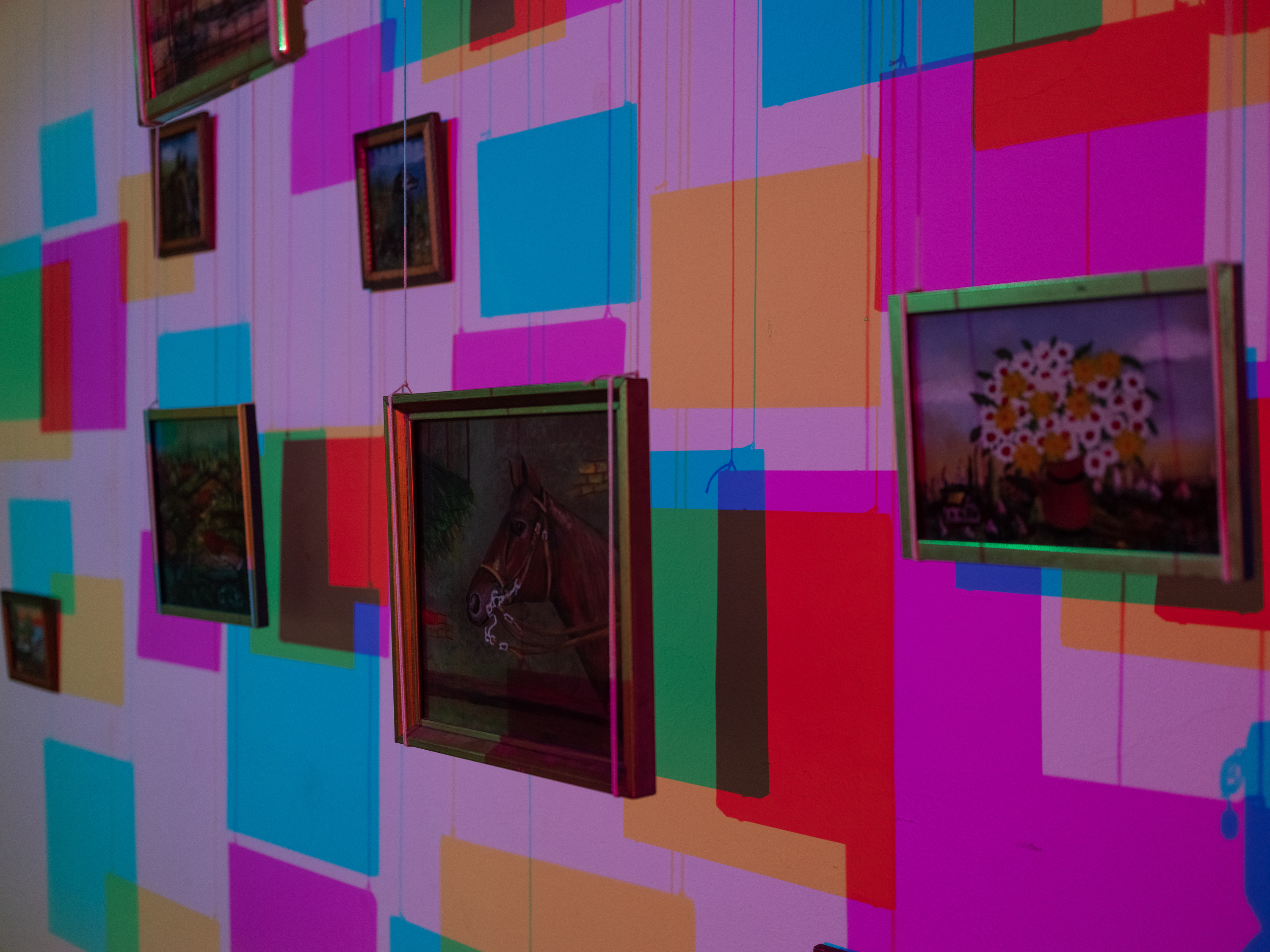 For the beginning of 2021, we present the work by Vida Guzmić, winner of the competition for the production and exhibition of the new work Tvornica under the title „Shadows of her paintings“.

During the month of December, Vida Guzmić used the gallery space as her studio, a place where processuality and production coexist. „Naive for women“ was the working title of the accepted proposal for research of the archive of amateur artist Sofia Guzmić, the artist’s grandmother, and her intervention in the collection of grandmother’s never-before-exhibited paintings. The idea for the work arose from the continuation of research on feminist geography with focus on the relationship between amateur and professional artistic position. It is an important fact that this work is located in the space of Miroslav Kraljević Gallery, whose work until the mid-nineties was associated with amateur art.

Sofija Guzmić used painting on glass as her main technique – on the backs of the paintings it can be seen that it was in the period of the eighties and nineties. Her paintings were created by copying, redrawing and collaging, and Vida also appropriates these techniques, using them in the analysis and deeper understanding of her grandmother’s art. In this work, the artist experiments with color and light, making the gallery space a place of close encounter between traditional and contemporary approaches to artistic and amateur work.

Vida Guzmić (b. 1986, Zagreb), works with painting, video and sound. She holds a Master’s Degree in New Media from the Academy of Fine Arts in Zagreb. She graduated in Women’s Studies and Curatorial Platform Program 2013. Since 2009 she has been exhibiting in Croatia and abroad. She was a resident at V2_Summersessions Test Lab, V2_Institute for unstable media in Rotterdam 2016 and KulturKontakt Austria in Vienna 2017, participant in WHW Academy in Zagreb 2018, and Home Workspace program , Ashkal Alwan, in Beirut 2019. Recent works deal with gender geography, relationships between objects and subjects, and still lifes. From 2012-2018 she was a member of the collective Space is Tactics. She organizes and leads workshops through Studio Pangolin, an art organization in which she has been a member since 2013. She is part of the recently formed collective Zvukospjevi (with Nicole Hewitt and Ivan Slipčević).