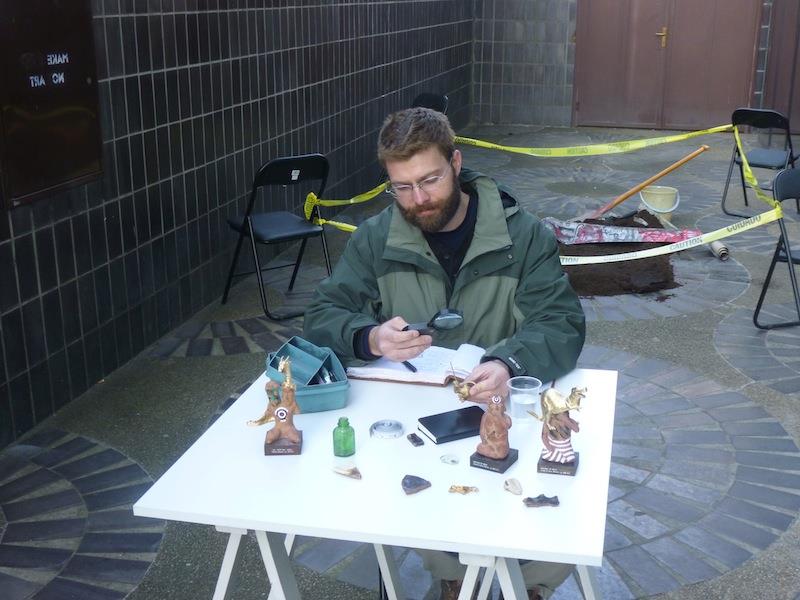 In the exhibition, The Lost City, American artist Joshua Goode will showcase the remnants of an underground city, a part of an imaginary ancient civilization. These ruins were found during an archeological research of multiple locations near the Miroslav Kraljević Gallery from March 11th to 14th. Posing as an archaeologist, Goode has publicly carried out an archaeological dig and discovered amazing lost treasures.

During the excavation, the passersby have witnessed the discovery of objects of the lost city and contemplated the boundaries between reality and fiction.

Joshua Goode will exhibit these found objects within the gallery space, temporarily transforming G-MK into a small archeological museum where reality and fiction become one.

Joshua Goode was born in 1981 in Fort Worth, Texas. He received his BFA from SMU in Dallas, Texas and his MFA from Boston University in Boston, Massachusetts.  He has had solo exhibitions in international venues such as the Zendai Museum of Modern Art, Shanghai, China; Darb 1718 in Cairo, Egypt; LaSala Gallery in Zaragoza, Spain, and Shanghai University in Shanghai, China; in addition to group exhibitions at the Museum of the National Library in Madrid. Spain; National Library of Argentina, Buenos Aires, Argentina; Zentral Bibliothek, Zurich, Switzerland; University of Ulster, Belfast, Ireland; Westminster Library, Westminster, United Kingdom; MX Espai, Barcelona, Spain; and at Loyola University, Rome, Italy. Joshua has been a Visiting Artist or Guest Critic at Shanghai University, University of Massachusetts-Boston, Dartmouth College, Marist College, Rhode Island School of Design and Savannah College of Art and Design and was a researcher on an archaeological dig for the University of Tubingen at Vogelherd Cave in Germany.  He was awarded the Dozier Travel Grant from the Dallas Museum of Art and is currently the Chair of the Fine Arts Department at Tarrant County College in Fort Worth, Texas.