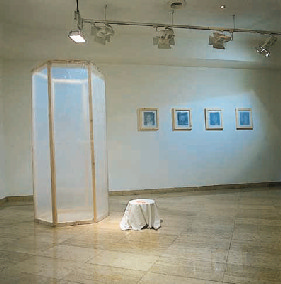 Ivan Šeremet belongs to a small group of Croatian artists who have, in an artistically relevant way, referred to the war reality, reaching for the spiritual echoes of time in which they lived. šeremet does it without the time pause, instantaneously and at once (while that reality is still ‘hot’); without suspecting that there should be no repose and that afterwards, he can, as all of us, expect almost equally difficult tectonic disturbances with traumatic consequences.

Again, without a second of hesitation, he dives into reality, now with even more reduced plastic elements, more pure and depersonalised artistic speech, but exhaustively brimming with the most direct referenciality.

Those are the private yards full of numbness, unwillingness, anxiety, morbid calmness and tepid pain that followed after the relief brought by ending of the war.

The blocks are possessively and jealously adopted by šeremet as places in which he gives himself in to lifelines, loss of masculine power, loneliness, daydreaming, emotional emptiness, apathy, empty stiffness, expectation…as places from which he looks into the world through his eyes half-opened. They are a private space of lulling into lethargy, melancholy, locus amoenus of ‘melancholic meditation’ (Antun Maračić).

šeremet’s new drowsy vision that rises from those places towards the outside, as through a non-transparent and non-propulsive prism, could be best read on the faces of the photographed persons who obviously not so long ago meant something to him, but now are dimmed with that melancholic and somnolent optics.

The new spiritual reality, geographically, symbolically and a bit melodramatically – is defined by humus, probably dug out from his home-garden in Slavonski Brod and than shut in a jar, as food provision for winter, a glassy reserve of a little power spared in characteristic “Dunstflashe”. But humus is still only soil, no matter where it was dug out, it does not have a local odour, and thus that soil shut in a jar, covered with cellophane and a rubber band, adds to šeremet’s story a wider, all-Croatian and also more general context and significance.

Although it is pleasant to ‘love melancholy’, the Euclidean geometry – the mother of building on which principles are created šeremet’s blocks of enjoying the melancholy, strongly suggests the need for a cathartic soberness, a new construct, a new dynamism and establishment of the primeval order and sensuality into a chaos which šeremet tackles so calmly.

How to find emancipation again, how to reach freedom and concealed force? Through playing? Ludism? Through the reawakening of a personal Eros – the act here presented in direct, theatrical, even grotesquely apostrophized manner as a possibility symbolised by a display of a pink condom on a snow-white bath-towel?

Ivan Šeremet was born in 1952 in Erdevik. He lives in Slavonski Brod.