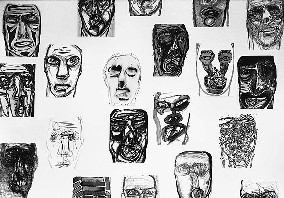 The burden of risk that a young artist is taking by publicly announcing that in overwhelming presence of cacophony of sounds and signs he finally has something to say, is proportional to the responsibility with which the public and the profession, as well as the author of these lines, could accept the challenge. The risk is mutual. Provoked by the aesthetic act and the culture of the intellectual and emotional curiosity, it is tranquillised with the dialogue based on its poetical, metaphorical and ethical level. This is the link which integrates the artist and its working habitat into a unique whole, and all of us, the artist and the public, places among the more or less alienated wanderers in a world that linearly and mostly onedimensionally moves towards the end of the Millennium.
For me it seemed necessary to insert some of these rhetorical remarks into Svebor Vidmar’s preface, in order not to divert the attention heedlessly and hastily from the shapes in time and space to the shapes of substance and spirit. These determining co-ordinates which inevitably stipulate almost every art piece should carefully be taken care of, not because of the necessity for Swiss precision or Cartesianism, but in order to complete this system with all of those energy lines and directions which retract, making it less menacing, factually acceptable and bearable. The artist was given that kind of capability to shape this oftenly subconscious resistance to the system on an aesthetic level, as well as to create, with the noble means and the artistic language, the needed dialogical balance between the universe that surrounds him and his own solitude.

Three hundred and sixty five self-portraits of an artist is a kind of an esthetical and also psychological discourse that both in the whole and in detail presents the publicly exposed cipher of intimate joy and sorrow, accomplishment and dilemma, vitality and nothingness. The transformation of a figure into a sign and the transformation of a sign into a cheerful graphic game, are the different ways of transformation of the physical presence into a metaphysical fluid, and exactly in this alchemy process Vidmar shows his persistence and proficient skill. Con-fronted with his personal image, drawn with almost miniature precision and chronicle tidiness, Vidmar creates the diary of his existence, the spiritual and physical alterations that he goes through and parttakes. The frontality of his figure does not leave any doubt. The confrontation is not simple, there are traces of drama of the eye and the spirit, the drama of the relationship between the real and the illusory. All of this would be dangerous if the presented would not contain a fine emotional line of an artistic being that turns the confession into an artistic thought. It contains the beginning and the end of this ‘brief encounter’ with the artist who has in his own image found the motif of equation between the general and the individual as well as the chance to reconcile them three hundred and sixty five times in the whole of exquisite graphic refinement strenghtened with the ontological questionability.

Svebor Vidmar was born in Zagreb in 1973. He graduated painting from the Academy of Fine Arts in Zagreb, the Teaching Department, in the class of Prof. Miroslav Sutej. He is the winner of the five-month fellowship in ‘Kulturzentrum BINZ 39’, Scuol, Switzerland for 1997.