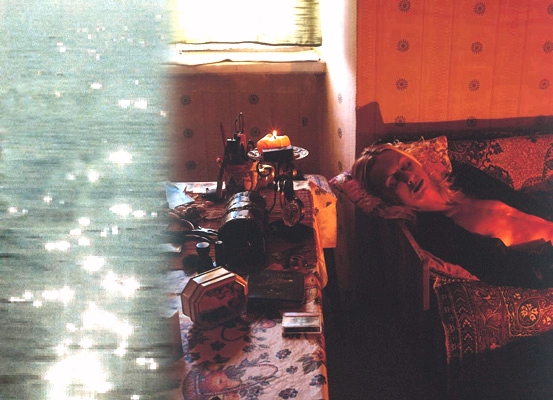 From the beginning of the nineties the art of Vlado Zrnić, the painter with the diploma of the Academy of Fine Arts in Venice, becomes more and more oriented towards the ‘moving pictures’. He exhibits rarely, the ambitious film productions are replacing video projects, his directing skill becomes more appreciated and finally awarded. Although Zrnić’s primary love for painting is pushed aside, the emphasised visual quality of his movies points to the painter’s roots and sensibility. In the movie ‘The Street Happenings of the Brkan Brothers’those are shown through the ability of decoding the visual system of someone else’s creativity. Zrnić dared to challenge the risky attraction of animating the photographs of the cult Zadar photographers Ante and Zvonimir Brkan – and succeeded! In the awarded movie ‘Scales’he has incontestably proved his artistic refinement through reduction of the sight of nature to the entirely abstract contents, exclusively through the elementary filming procedures – zooming and taking images. Zrnić’s concern about the visual quality enriched the documentary aspect of both movies with sagacious and unobtrusive author’s insight, its result being exactly the contrary to the egoistic escapades so usual for Croatian movies with art pretensions.
As much as Zrnić’s film oeuvre displays his painting background, this preface is more interested in how his filming experience influenced the works that were, for the past few years, intended for his rare gallery presentations.

Observing the general movements of today’s art, it is obvious that the various technologies of realisation and the media presentation of the moving pictures are most easily and most agreeably fitted into the wide frame of the art of installation. Within this procedure Zrnić’s last two gallery exhibitions explore simultaneous projection and the interaction of still and moving pictures. The installation ‘Yard’(1988) was presented last June as a part of ‘The Morning Star’exhibition by the artists from Zadar and Amsterdam in the Gallery of Arts in Zadar. The picture of the exit from Paklenica National Park is projected all over the surface of the white wall in the darkened room. Zrnić selected the most conspicuous take: between the two precipitous cliffs there is small fragment of the sea lit by rays of the sunset. On the floor, a few meters in front of the projection, he placed a monitor with the video recording of a watchdog on a chain. The dog’s hurried up and down walk along the ‘wire’is abruptly interrupted by visitor’s incautious approach which, with the help of a photo-cell, activates sequences of threatening barking and growling. When the visitor steps away, the same mechanism ‘calms down’the watchdog. The understanding of this work, which is not going to be discussed now, in many ways depends on the conjunction of the two images: the slide projection and the video recording, the difference of their dimensions and their arrangement within the plans of the installation.

The installation ‘Lullaby’, exhibited for the first time in Miroslav Kraljevic Gallery, literally connects the moving with the still image. They are projected as one whole, offering us a sort of moving-still image. It is clear that the accord of the dichotomy of such a hybrid composition will be the basic creative challenge and problem. Zrnić connects the two images vertically. One third of the format is a moving projection presenting sun reflections on the surface of the sea which following its celestial movement enter and than exit the static take. The fixed part of the projection is a photograph of an interior where in a thick reddish enclosing of a summer afternoon, lies a young woman. The image is with the help of light, again vertically, divided into two parts: the lighter part with a window and a chest full of things, and the dark-reddish half with the central motif of a nude falling into sleep. For the concord of these formally unequal parts, Zrnić has developed a complex game based on the simultaneity of different forms of perception. The potential heft of kinetic attraction was prevented by contracting the movable part of the picture to the third of the composition, than reducing its colourist values to the grey-blue line of almost abstract scintillation and slowing its motion to the mere appearance. The still part of the projection is twice as large and dense in colour, but in order not to prevail, it is divided by light, opened towards depth and overfilled by details. The formula of the projection 1:2 regarding surfaces was found. The moving-abstract part takes two times less space from the still-figurative part. This is where we approach the traditional painting solution – the golden cut rule. The most intriguing motif of the painting, the nude, is faultlessly introduced to the composition in the point that defines it as central exactly through this oldest principle of beauty.

When examining the ‘Lullaby’, because of the introduction of the nude almost unchaste for Zrnić’s sensitive poetics and personal restraint, it seems as if he within the instability of the contemporary technological procedures wants to fixate a moment which is irretrievable within a nature of things. The Impressionists were the first who fixated the transience of a moment in the traditional painting media. Vlado Zrnić is never interested in the physical level of reality or the presentation of its dissolving under a ray of photons into a superior cosmic relativity of colour. He is interested in that moment of falling into sleep, so dear to the surrealists, in which the ego and its here and now unite with the overwhelming spirituality and open towards the outbursts of consciously suppressed libido. The moving part is a carrier of the unity of form and meaning. It is the projection of that luminous substance which can be felt through the window as an intensive presence outside the room. On the symbolic level it reflects merging with the metaphysical aspect of existence, the unrestrained manifestations of energy in which the spiritual side of reality is imbued with its physical counterpart.

The auditive component of the installation (the sound of two distant radio-stations) is another generator of a sensation of stepping away from reality and falling into sleep.

The fact is that the movie has become an irresistible challenge, and for the past few years almost a fashion among the visual artists. Are the reasons for that the formal features such as the size of the movie picture; its powerful spectrum of colours and subtlety of the black and white counterpart or its multimedia nature? Or, maybe, the vastness of the auditorium with its possibility and potential for simultaneous message transferring, backed with influence based on the mythical order of the film industry? Maybe all together? Peter Greenaway, first an Art major in painting, dedicated himself completely to film industry, becoming a cult director. The art-superstars Robert Longo (‘Johnny Mnemonic’, 1995, TriStar Pictures) and Julian Schnabel (‘Basquiat’, 1996, Miramax Films) made the commercially successful outings to the productions of the big studios. Cindy Sherman built her artistic fame on reconstruction of movie clips which in the meantime became the global collective unconsciousness, ending last year with her first feature film ‘Office Killer’(1997).

Within the small Croatian territory the indigenous film industry hardly exists, therefore the mythical film aura shines even brighter. In Zrnić’s movies the art of film is liberated from its glamorous aspects. The modalities of the film expression in his oeuvre are used only because they are the best possible transfer of his vision. Returning to the basic question of this preface we can conclude that for Vlado Zrnić’s gallery presentation the experience in the film media imposed the need to create the total experience of a movie projection: the unity of picture, sound and movement. Apart from that, the ‘Lullaby’in its nature is closer to painting. There is no duration or the story. Just one utterly slowed moment in which the spectators could have the time to feel that minute fragment of a real time and space when this event happened. Vlado Zrnić in his Zadar chronicles performed another successful reconstruction.

Vlado Zrnić was born in 1959 in Sarajevo, lives and works in Zadar. He completed his studies of painting in 1989 at the Accademia di Belle Arti in Venice. In 1993 Zrnić became a member of Croatian Association of Artists. Since 1997 he has been a lecturer on the Department of Visual Communication of the Academy of Arts at the University of Split