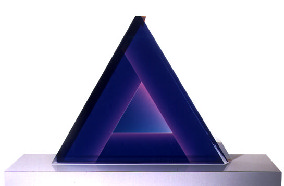 ….””and God saw that the light was good” says the Bible. Then God separated the light from the darkness, and the light was called the Day, and the darkness was called the Night. So much for the Bible. Later, much later after the Biblical period, the human mind realized that things with the light do not function in such a simple way: that the light is a movement of waves of different length, that the eye percepts only a limited quantity of these waves, and that what it sees is beautiful; that the waves that cannot be seen can be very dangerous; that in other words a ray of light has energetic properties, even weight; and that the light is both the energy and weight, and so on, and so on. Physics, obviously leads us to metaphysics, as the physicist Werner Heisenberg nicely put it. On the very edge there is a crisis of materialistic understanding, and this is the moment for returning humbly to our source, and confirming: yes, the light is good.

However, I do not think that art can give an answer – and what for – to questions that are rightly bothering us. But art has in its disposition the instruments with which it inquires about and investigates the universe that surrounds us, I am deeply convinced about that. I am also convinced that the aesthetic dimension of art hides many messages and directions how to live oneís own life with dignity, and how to understand this miracle called the world that surrounds us. Every artistic thought or gesture, every shape and artistic content give their tribute to that.

Here and now, we have before us the work of an artist which lead me to begin with the words from the Creation of the World. It is the work of Damir, a Californian Croat who less than a year ago came as a surprise, thanks to the beauty of his art that lead me to help presenting his work here, in his homeland with the kindness and cooperation of Croatian artistic institutions. The technical and organizational part of his first one-man presentation in Croatia, I leave here on the side, with the remark that it was not an easy task. I would rather talk about his art, the beauty, and the pureness of the noble shapes that Damir creates, and moreover about the light which properties the artist managed to use so masterfully, shaping them into a noble aesthetic form. That is why I started with the Creation which gives the complete importance of the physical and metaphysical meaning of light.

Today, when the impressionist perception of the living light is past history, and when this media ñ as Mc Luhan would say- became an integral part of out urban surrounding, the creation of artistic shapes based on the properties of light, is a legitimate creation procedure. Moreover, it is implanted in the very foundations of the twentieth-century art. Damir excellently continues the best constructivist tradition, basically the unfinished chapter of the twentieth-century art. This is where he found his persuasion , as well as inspiration for finding his artistic credo based on the synthesis of a strict plastic geometry and luxurious,  almost uncontrollable, play of light. There was no other way. Obviously, the light suits its precise form; Let us remember: it is the prism where the white and the transparent ray of light turns into the wonder of spectrum and the true beauty of colours. Therefore, Damir invented a trap, in the shape of a solid form, with strictly cut angles and perfectly polished surfaces of a material that literally absorbs even the smallest light stimulus, so that the material, transformed into a plastic body, could be left to the pleasures of the eye and the spirit.

His art was not created for the darkish museum collections. They are intensely interactive, looking for a space of social contacts and public life. They are spatio-kinetic works, which full life comes into being only in an active contact and active perception. They are the message that the light is good and that the life lighted with its rays has a meaning because of the colours, their scintillation and their property to present the world and the universe in the best possible way.

Damir Biočina
Born in Belgrade in 1950. He graduated Law from the University in Novi Sad, 1978. In 1982 he moved to the USA to persue artistic carer. The basic sculpting skills that he have learned while studying in Novi Sad he perfected at Vasa Mihić studio in Los Angeles. He started solo career in 1987 as an acrylic painter. From 1989 he exhibits successfully in USA and Japan.