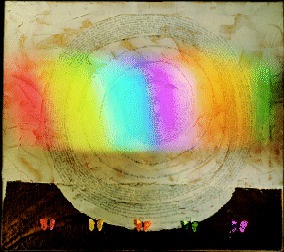 Each Thing has its Spectralsignature

The resoluteness of artist to express all ofhis experiences by constant use of single element is alwaysfascinating. But, in one of the texts written in spirals, ManuelaVladic annotate: “The artist sees things each time as if hesees them for the first time ( or he consciously exerthimself)… “, and thus explains her own principle on which shebased choice of the spirals that are appearing without exceptionin her works.

The spiral, in its connotations, is one of themost substantial symbols. In the range from microcosms tomacrocosms it interprets and denotes numberless phenomenon, butalthough microcosms and macrocosms are equally structured, it isnot only a matter of the change of size but also of the relationbetween an individual and one’s identity towards, in brief, theuniverse.

The spiral is a primary form, reproductive,regenerative, recycle, emissive and receptive, progressive andregressive, integrative, but dynamic, thus lively. If the light,consequently color, is added to the spiral, all the significanceof color and light is added to it, too.

Manuela Vladic ads spectrum, the range of lightaccessible to the human eye, to the spiral. With it sheenlightens spiral text thus giving it characteristics of theuniversal, but feeling conscious of the fact that “every thinghas its spectral signature”, meaning identity, the spiral,consequently, is not only designation of the universal but alsoof individual.

On the exhibition this abstract conglomerate iscombined with the figurative elements of reality, which are alsocontaining spiral nature. Three assemblages, one on which silkroses and feather butterflies surround spirally written text, thesecond which contains conserved evergreen plants and light andthe third with dehydrated lemon slices placed within text spiral,conduct to possible but unnatural longevity and, at the sametime, omnipresence of transience in the Nature and, as well, tothe fact that “the world contains much more than what isvisible to us.” The structure of the spiral, although it is notformally visible on these three works ( with the exception of thetext disposition) in the mode in which uses elements of thenature sustains nature’s “spiral” characteristics: advanceand retreat, development and disappearance.

The large board, almost panopticum of familyphotographs is distinctly carrier of the space-time structure ofthe spiral, although even here the spiral is not formallypresent. The selection of photographs is narrowed to theauthor’s family: herself, husband and daughters, in the timespan from author’s childhood till today. The corners are bondedby children’s drawings as a parameters of the present, bothtime and cognition. Size of the format and quantity of the chosenphotographs clearly denotes that this family retro-projection isnot limited only on author’s family, but designates all formerand future generations limitlessly and that it is, at the sametime, integrative and dynamic and thus has all characteristics ofthe Spiral, the microcosm in the cosmos, the structure ofmacrocosm, the size of the Universe. Time straits and uniquenessof the seemingly alike is shadowed under the illuminated wings ofthe red feathered butterflies under which this family resumetakes place.

Consolidating character shadowed by transienceand uniquness imbuis entire exhibition. Reconsideration ofone’s own presence and position in the intimate microcosm andof one’s spectral signature in the macrocosm, is possible onlywith retrospective insight in one’s youth, one’s maturity andin those little spirals that one is emitting to the world.

Manuela Vladic subordinated her activity to thespectrum of the spirals, consequently to the all variants ofdynamics and viability.

Manuela Vladic Mastruko
Born in 1962. She graduated from the Academy ofthe Fine Arts, Zagreb in 1985, in the class of prof. FerdinandKulmer. Since 1986 she is member of Croatian Association ofVisual Artists. Besides her professional art work she is engagedin practical and research work in the field of visual expressionof children. She is the author of the numerous visual projectsfor children. She lives and works in Zagreb.