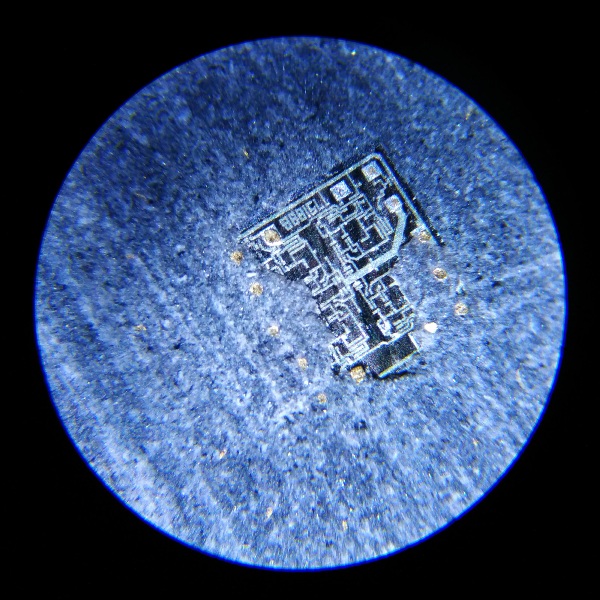 History is an interpretation of the meaning that the past has for us. – Johan Huizinga

The exhibition ‘Micro Archeology’ shows what happens when a number of integrated circuits – in the common name: chips – are found in one place and move into ‘archaeological excavations’ below the surface of micro artifacts.

The history of electronics knows the concept of the integrated circuit thanks to physicists Robert Noyce and Jack Kilby who presented their work in 1958 as part of Texas Instruments. Exactly sixty years later, two authors begin their primitive ‘archeological’ excavations on the surfaces of monolithic chips, some thirty years old, in their local makerspace. Using crude mechanical methods, they defile their artifacts, but at the same time apply methods of preserving objects in situ and fence the surfaces of their excavations on chips, making them ‘micro-sites’.

Excavating and scraping archeological artifacts beneath the microscope, they come across a fascinating world of electronic “cities”, functional and rational architectural structures and markings. But the author’s focus in this case is not on reconstructing the original meanings and logic of the chips (reverse engineering), but on recognizing the aesthetic values ​​of found, commonly unknown and invisible structures.

By exposing the fragility of the chip to the palm of the hand and moving it beneath the microscope, the chip becomes a powerful witness to an advanced civilization, seemingly far more advanced than that of scientists trying to satisfy the curiosity of the surface of the artifact while playing with the position of a micro-archeologist. The process of shifting the admiration of ‘explorers’ who consume, for example, the 555 chip among many, encounters the complex structure of urban geographies and leaves the site open to future micro-archaeologists and brings the visitor into the strange intimacy of a small and at the same time giant microscopic world.

Thus processed ‘artifacts’ at some point become ‘conserved’ objects of ‘primitive’ technology, while such a time and ‘exploratory’ micro-journey from homo sapiens to homo ludens allows the question to emerge at what point and at what scale, one the object becomes an archeological artifact.

Ministry of Culture of the Republic of Croatia, City of Zagreb