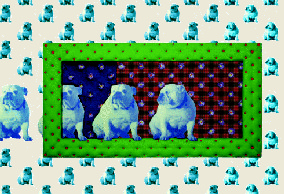 Adopting the aggressive operative discourse so efficaciously utilised in public relations, Ines Krasić has from the very beginning established important strategic control over the major communicational potential of her art. In consequence, her work is characterised by, extremely subtle manipulative seductiveness, which in its final stage, the conquest of the audience, achieves more than admirable results. It is true that visual attraction of these huge decorative panels can hardly remain unnoticeable. However, there is a clear diferentia specifica that surely distinguishes these works from commercial works of advertising design and any other trivial poster “action”. This is a gentle and clever artistic relation which goes beyond inarticulate exclusivity and the entropy of advertising. It is the very practice of artistic seriousness through the same linguistic method, that denies that immoral process which resulted in today’s sad triumph of advertising as the universal paradigm of culture and value.

Hyperproduction, alien to Ines Krasić’s inherent creative intent, places her even further apart from uncontrollable production. Her show contains only a few patiently completed works. In one of them, seven pairs of legs in an assonance of repetition and multiplication evoke a representative team of urban soccer freaks. Their identities remains unknown because we can see only the lower part of their bodies – from the waist down. It is said that soccer players do not need their heads, but this formal selection is only the artist’s trick. Namely, these players who wear dirty boots and are comfortable with the ball, do not pose in front of us in order to express a negative feminine view of soccer. On the contrary, this piece is not a comment on the mentioned sport, nor is the team used as a substitute for some posed display.

This idea becomes clear as soon as we discover full figures of players printed on the frame of superimposed little pillows. These fetishist fan souvenirs replenish the primary context of the work transforming it into a form of artistic installation. Only now do we become aware of the complexity of this puzzle. Ines Krasić in general, transforms the field of her artistic theory into a design which goes far beyond the frames of original painting filling it up in order to create a sequence of happenings on a small field of privacy.

Such actions successfully preserve a trace of health, youth and intelligence within a general and suffocating urban density. Therefore it is not accidental that the author borrows characters for her play from two art-critics and two artists, her colleagues and friends. But their initial macho vigour and tattooed hot-lover characters appear fragile and questionable, while the hedonistic know-how and cool attitude dominate the painting. We become aware that this is actually a team of urban fitness freaks who in an off-hand and nonchalant manner offer the most convincing welcome to the post-modern house of fun.

Another piece entitled Selfportrait With the Dog suggests how the artist starts from her refined sense for the material (what might be her best), but also with an ironic distance towards her own figure, presented in rich layers of the existential and the intimate. Her work is created at the very end of this century when genetic engineering attempts to redefine biologic structures, and threatens to destroy permanently the human existential archetype. Cloned bulldogs here have a minor role of pattern painting, but clearly warn about the approaching hyper-realistic reproduction. This small detail shows how Ines Krasić resists contemporary insanity and general nihilism. In the first place it is her pop-art and psychedelic originating wit, that mesmerises us into a state of positive madness.

On the other hand, positive flower patterns and ruffled multicoloured bounty of drapings used to achieve purely painterly effects, reflect a subtle personality full of joie de vivre, ecologically and spiritually purified. Colours of petite bourgeois kitsch are completely foreign to natural and open intent of Ines Krasić. She has already an established program of aesthetic renovation, and it is obvious that after this show, she wishes to branch gradually into fashion design, urban design, or a total redesign of her environment. As a painter, she will move in the direction of ambience, adapted to contemporary man, free of ignorant prejudice, and even more liberated from frustrations of class and social superiority.